Semarang (21/9) – Faculty of Fisheries and Marine Sciences (FPIK) Diponegoro University (Undip) Semarang hosted the 2022 Fisheries and Marine Higher Education Leadership Forum (FP2TPKI) and a National Seminar with the theme “Society 5.0 and Disaster Resilience for Sustainable Coastal Development ” which was held on September 20-21, 2022 at Prof. Soedarto Building Undip Tembalang Campus. Attended by representatives of the leadership of the Faculty of Fisheries and Marine Science from various universities in Indonesia, this forum became a forum for discussion of fisheries and marine sciences experts in alleviating environmental problems in Indonesia, which is a major maritime country in the world. This national seminar presented the Minister of Maritime Affairs and Fisheries Republic of Indonesia, Sakti Wahyu Trenggono as the keynote speaker. Also present were the Governor of Central Java, Ganjar Pranowo; Director of Research, Technology and Community Service of the Ministry of Education, Culture, Research and Technology Republic of Indonesia, M. Faiz Syuaib; Rector of Diponegoro University, Yos Johan Utama; participants and invited guests.

The Dean of FPIK Undip, Prof. Ir. Tri Winarni Agustini, M.Sc., Ph.D. officially opened the 2022 FP2TPKI event and the National Seminar. Prof. Tri expressed her gratitude for the extraordinary contributions of the participants, as evidenced by the submission of 64 national articles and 110 international articles. “There are experts of fisheries and marine sciences from all universities in Indonesia here, later all members can discuss common problems that occurred. Indonesia as a global maritime axis has many marine resources that can be optimized for national development,” she said.

Followed by remarks from the Undip Rector, Prof. Dr. Yos Johan Utama, SH., M. Hum. conveyed that the sea became the support and strength of the Unitary State of the Republic of Indonesia. Prof Yos said that there needs to be cooperation between the government and educational institutions, to educate the public that in the fisheries and marine industry there are many job opportunities, not only fishermen, but also in various sectors that are engaged in optimizing the utilization of aquatic resources in Indonesia. In an effort to support the program, Undip provides free educational facilities for fishermen’s children who can’t afford it, and this year there were 40 students of FPIK Undip who received scholarships. “We must take a strategic role according to our authority to restore maritime glory,” said Prof. Yos.

Referring to the theme of this event, the Governor of Central Java, Ganjar Pranowo said that the problem that often arises in the coastal area is land subsidence, where the handling is still in progress until now by cooperating with experts from within and outside the country. Now is the time to shift our focus from land-based oriented to ocean-based oriented. Ganjar Pranowo said that the coast on the coastal area of Central Java is long, with capture fisheries potential reaching 340,082 tons, and there are 106,466 fishermen. Therefore, in assisting the feasibility and improvement of the standard of living of Indonesian fishermen, it takes time so it requires cooperation from various parties who are experts in disaster mitigation, solving environmental problems as well as technical issues.

In line with the Undip Rector’s policy, Ganjar Pranowo said, “I support the investment of the family of fishermen driven by Undip, because in the future the students will be the way to alleviate poverty in their families.”

“About today’s issue regarding coastal area management and disaster mitigation, in the southern area of Central Java there are only a few industries. The area must be included in the development plan, we make a model including which areas are resistant to disasters and which are not. In the northern area of Central Java, the management of aquaculture needs to be improved, and repairs are needed due to the damage caused by land subsidence,” explained Ganjar Pranowo about water problems, especially in the Central Java area. 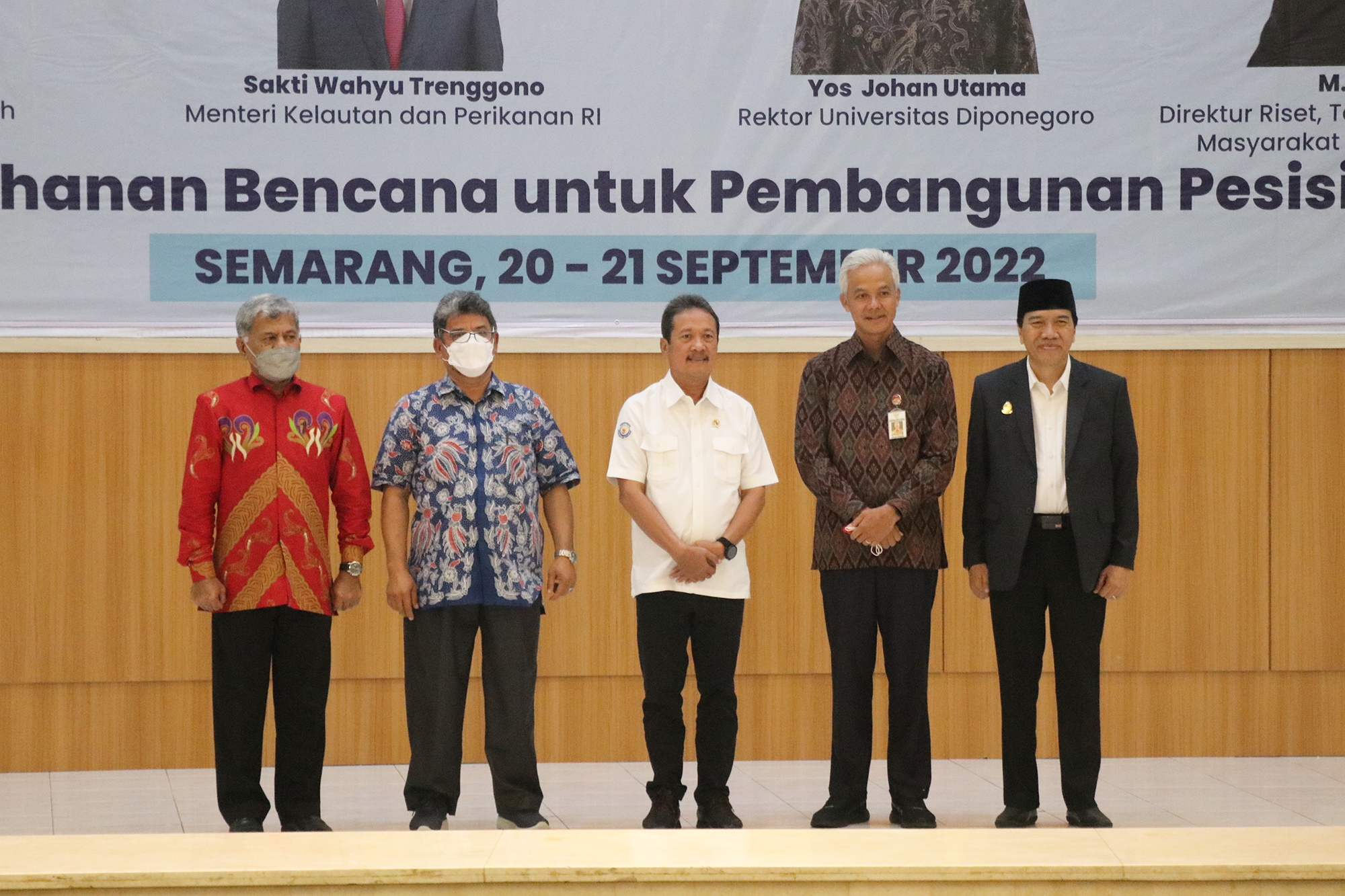 The Minister of Maritime Affairs and Fisheries Republic of Indonesia, Sakti Wahyu Trenggono, was the keynote speaker who delivered his material entitled “Implementation of a Blue Economy for Indonesia 2045”. Minister Trenggono said that marine represents ecology, where ecology is the commander in chief, and fisheries as the economy. The need for protein will increase by 70% which is a challenge in 2050, and of course it will have an impact on the fisheries and marine sector because aquatic resources are the main source of protein for food and health.

The five implementations of the Blue Economy offered by Minister Trenggono are Expansion of Marine Conservation Areas, Quota-Based Measurable Fishing and Fishing Zones, Development of Marine Cultivation, Coastal and Inland Areas, Sustainable Management of Coastal and Small Islands, and Marine Debris Management. The Minister of Maritime Affairs and Fisheries Republic of Indonesia also stated that the Indonesian government was intensifying the cultivation of shrimp, lobster, crab and seaweed, which are champion commodities in Indonesia.

Then the Director of Research, Technology and Community Service of the Ministry of Education, Culture, Research and Technology RI, M. Faiz Syuaib explained the material on “Transformation of Business Processes & Performance Governance of DRTPM (Directorate of Research, Technology, and Community Service)”. Faiz said that research is a reflection of oneself because research is the result of exploration. “To get something of the highest quality, the process must also have the highest qualifications,” said Faiz.

In an effort to strengthen the quality, relevance, and utilization of scientific journals and intellectual property rights, Faiz explained that scientific work is a Bank of Knowledge and Sciences, so it must be able to play a role as a saver, protector, and manager of the nation’s science and technology assets. Utilization of research results to the public can be done through DUDI commercialization cooperation or dissemination cooperation to the wider community according to the regional context. 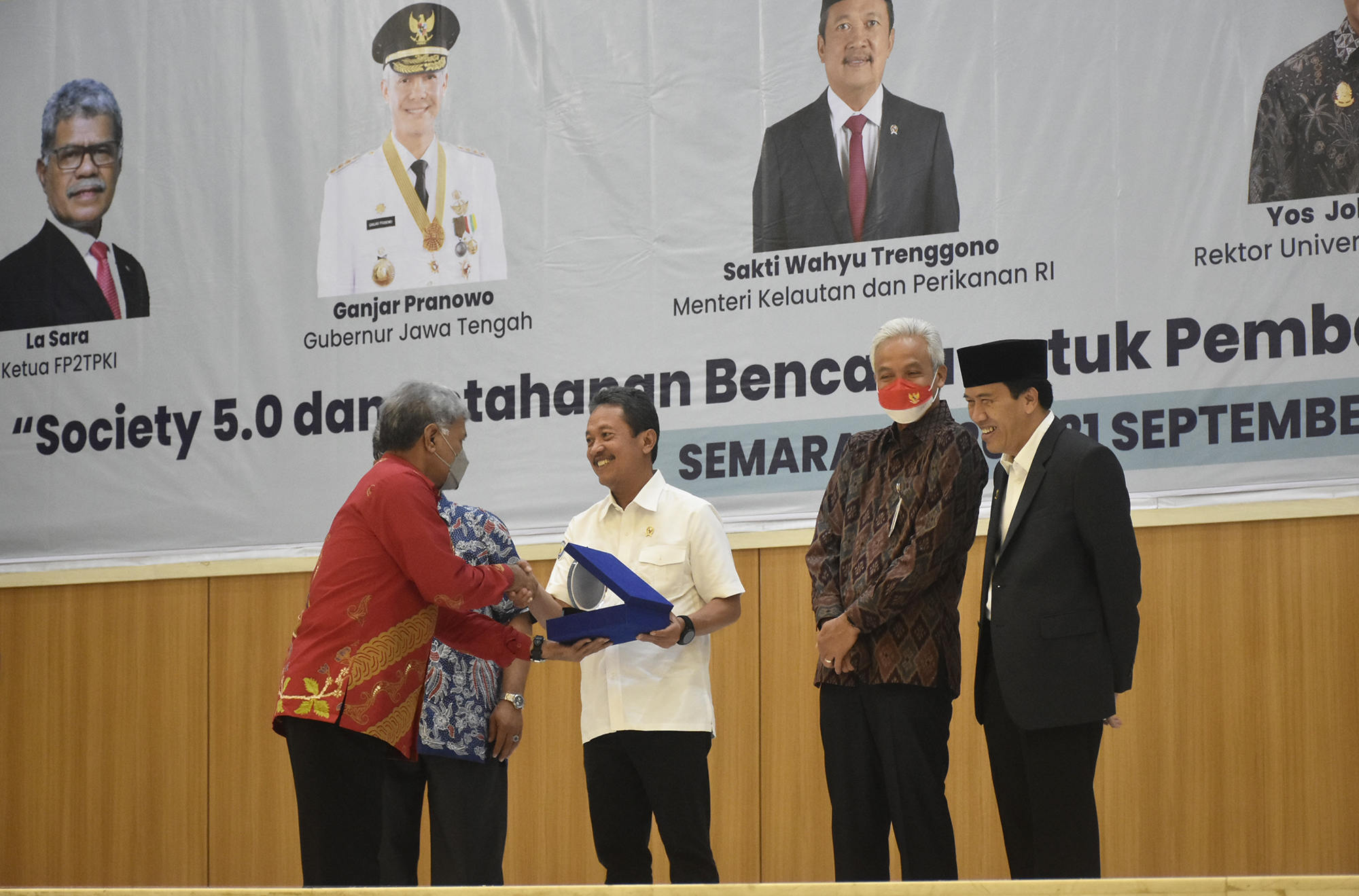