The impact of the flood that occurred in Meteseh Semarang on Friday, January 6, 2023 has begun to enter the post-disaster phase. Complaints related to health have begun to be felt by victims, especially for those who still live in affected locations. As part of measures to provide sustainable community services, Diponegoro University (Undip) deployed a Medical Team to flood-affected areas, one of which was housing in the Rowosari area. Through the Diponegoro Disaster Assistance Response Team (D-DART), this activity was carried out together with the volunteers who joined. The D-DART team, which is also the Disaster Task Force at Undip, consists of lecturers, educational staff and students from various educational backgrounds, both medical and non-medical. Apart from that, D-DART also includes internal and external volunteers.

In her direction, Prof. Dr. Rahayu, S.H., M.Hum., the Deputy Head of the Institute for Research and Community Service (LPPM) in the field of Community Service said that the Medical Team departed as part of Undip’s commitment to assist the flood victims. “Together with D-DART, we are working with several related teams. These teams synergize with each other to be able to provide wider benefits for affected residents. The Rector’s commitment is very strong where we received a direct mandate to provide maximum, targeted and holistic assistance,” she added. 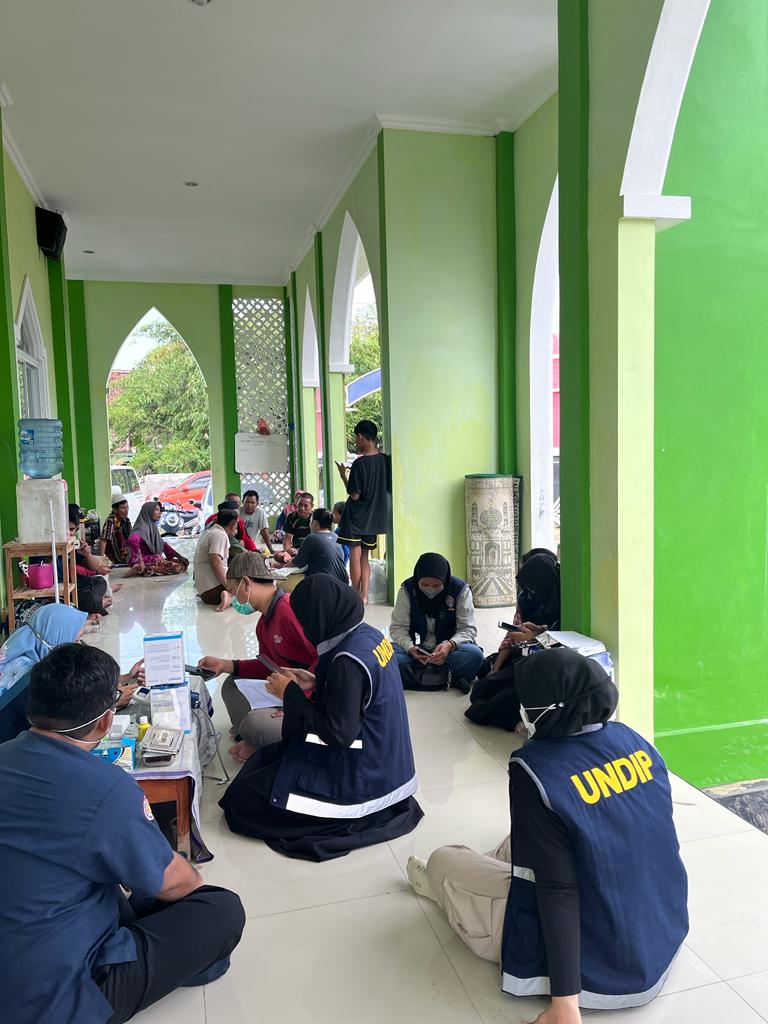 The teams that departed (Team III departed Sunday, January 8, 2023 at 13.00 WIB; Team IV departed Monday, January 9, 2023 at 15.00 WIB; Team V departed Tuesday, January 10, 2023 at 07.00 WIB, Team VI departed Tuesday, January 10, 2023 at 14.00 WIB, Team VII departed Wednesday, January 11, 2023 at 14.00 WIB) are medical staff from various fields of expertise including dr. Achmad Zulfa Juniarto, M.Si.Med, MMR, Sp.And.(K), Ph.D, Ns. Nur Hafizhah Widyaningtyas, S.Kep., M.Kep., Nana Rochana, S.Kep., MN., dr. Helmia Farida, M.Kes., Sp.A., Ph.D., Prof. dr. Muhamad Thohar Arifin, Sp.BS., Ph.D.PA, dr. Kanti Yunika, Sp.THT-KL, dr. Dimas Tri Anantyo, Sp.A and nurses from the Diponegoro National Hospital (RSND) and also students from the Nursing Science Study Program. This medical service is carried out every day for approximately 1 week after the disaster in a door-to-door manner which aims to make it easier for residents to reach existing health facilities. Some of the services provided are anamnesis where the physical examination includes head to toe inspection, checking vital signs & capillary refill time. Screening and health checks for these survivors is an effort to reduce morbidity. It was found that several residents had a common cold, pruritus (itching), lacerations (wounds) requiring decongestants (airway relief), antihistamines and wound care. Residents also complained about various symptoms of ARI, such as coughing and runny nose because the weather was quite cold. D-DART has distributed blankets and clothes in addition to food and other basic needs as an effort to maintain health after the flood disaster. Hopefully the victims and volunteers are always under the protection of God Almighty. Recover, Mother Earth. (AS)